Renaissance: The Power of the Gospel However Dark the Times

"Has modernity finally done what no enemy or persecutor has ever succeeded in doing and reduced the authority of the Scriptures to a shifting weather vane and the church to babbling impotence?" So asks Os Guinness in this superb Renaissance: The Power of the Gospel However Dark the Times, a b 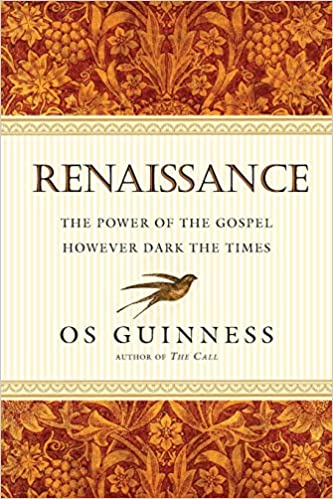 ook I recommended to you a few months ago. After reading it the second time—well worth it—thought I'd recommend it again, including some excerpts to whet your appetite.

Guinness claims, "The West has beaten back the totalitarian pretensions of both Hitler’s would-be master race in Germany and Stalin’s would-be master class in the Soviet Union. But now it stands weak and unsure of itself before its three current menaces: first, the equally totalitarian, would-be master-faith of Islamism… second, the increasingly totalitarian philosophy and zero-sum strategies of illiberal liberalism; and third, the self-destructive cultural chaos of the West’s own chosen ideas and lifestyles… destroying its identity… sapping its former strength."

As he astutely observes, "...Many of the defectors [from the Christian church] are not really atheists or even agnostic, but in limbo between the characteristic halfway houses of “believing without belonging” or still “belonging without believing.”

Commenting on the massive exodus from the churches, Guinness offers: "The vilest [form of Western worldliness] is the distortion of the gospel through American-style health-and-wealth theology, with its prosperity doctrines and their vicious exploitation of the unsuspecting poor. The logic and dynamics of this shameless twisting of the gospel run parallel to those of witchcraft…"

We should not think these developments are anything new. "Western cultural elites have disregarded God for more than two centuries, but for a while the effects were mostly confined to their own circles… Now in the 21st century, their movement from disregard to desecration to decadence is going mainstream, and the United States is only the lead society among those close to the tipping point."

Looking down the road towards that tipping point, the author anticipates a rather dark future: "Soon, as the legalization and then normalization of polyamory, polygamy, pedophilia and incest follow the same logic as that of abortion and homosexuality, the socially destructive consequences of these trends will reverberate… until the social chaos is beyond recovery."

Not to say that Renaissance is a negative book. Guinness not only takes pains to examine different facets of the issue, but ends each chapter with prayer. "… The church is the most diverse community on earth, the Bible is the most translated and translatable book in human history, churches are the most numerous social service agencies across the world… This is a time of momentous significance for the future of humanity."

Guinness calls us to authentic discipleship, and to resist the world's pull:  "...Consistent Christian living may be harder the higher it reaches, but this is no excuse for mediocre expectations and standards."

"[Jesus] flatly refused the temptations of power and fame offered him by the Grand Inquisitor from hell. He was no Judas Maccabaeus. His conspiracy was not that of the Zealots of his day. His revolutionary manifesto was not a bloody call to arms like that of Marx and Engels, Hitler and Himmler, Mao Zedong and Pol Pot. His mission was not at the point of a sword like Muhammad’s. In fact, Jesus was the unarmed prophet who renounced the sword, and seemed to turn away from the use of force that any civilization needs in order to build and sustain itself. And he appeared to show little or no interest in many of the burning issues that parade across our television screens, shout at us in the headlines of our newspapers, and rage like wildfire through our social media."

"Because of… the 'crooked timber' of our humanity (Immanuel Kant) or the fact that we are 'cracked human beings' (John Gray), our best endeavors will always be shot through with ironies and limitations."

"Still, the Christian… does not believe in modern revolutionary change that is effected from the outside only, for such change is always too shallow and does not last. The key to changing the world is simply being there, but an active, transforming engagement of a singularly robust and energetic kind… What changes the world is not a fully developed Christian worldview, but a worldview actually lived…"

As we move forward, we will make mistakes. Yet unlike the leaders of totalitarian regimes, Christians, the Christian church can and should admit when it is wrong: "The Christian faith calls for an open and voluntary confession of our wrongs, whenever we are wrong. This… is challenging and it may certainly be embarrassing for anyone who has to do it, but it is in fact an act of moral courage.  For in confession we are called to do what no human does naturally and easily: to go on record against ourselves."

As for the modern superstition that to achieve success in any area we must live and breathe for that alone, Guinness vehemently disagrees: "Down that way lies the path to idolatry, obsession, restlessness, cut-through rivalry, and a life marked by either arrogance or bitter regrets." (What a great point—one that all workaholics like me sorely need.)

But what about snazzy seminars, church growth plans, and high-tech missions consulting? Commenting on Isaiah 55:8-9, Guinness notes: "Only God can handle the whole world. The world is not ours to manage or to save. Our task is to focus on our individual callings in engaging with the world, to trust that others are following theirs too, and to leave to God the masterminding of the grand outcome." Futhermore, "The point is not that God’s thoughts are unknowable, but that they are different from our ours, higher than ours, and therefore they demand that we follow him and not simply our best ideas..."

Yet, as the author poignantly reminds us, "All too often we have abandoned our Lord’s concern for those in the shadows, the twilight, and the deep darkness of the world, and become cheerleaders for those in power and the naïve sycophants of the powerful and the rich." We can only accept the critique and applaud the perspective: "The kingdom of God is an upside-down, back-to-front, inside-out kingdom that stuns our expectations and blasts us out of our ruts and our prejudices." In other words, we can impact our world, even our culture, for Christ.