The Tower of Babel

The following material appeared in the weekly newsletter from 27 September to 11 October 2017. This series was adapted from The God Who Dared (1997), the next version of which was titled Genesis, Science & History (2004). The book is in the process of being completely rewritten (much needed), and I took advantage of this period of re-writing reflection more deeply on Genesis 11:1-9. The name of the new volume is Origins.

If you’re like me, you're intrigued by tall towers and buildings. Whenever I visit a new city, I want to ascend to the highest point and look out. My first sky­scraper was the Empire State Building; I was eight years old, and my father was showing me New York City. Fifty years on, I haven’t ceased to be thrilled by tall structures and the breathtaking views they afford. Toronto’s CN Tower, Sydney’s Centrepoint, Chicago’s Sears Tower, Berlin’s Funkturm (radio tower), Dubai’s 160-story Burj Khalifa—tall structures certainly have the power to wow us. 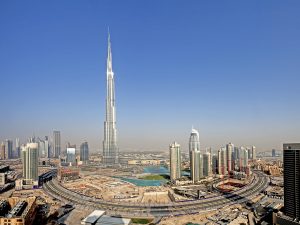 Babel
At the point in Genesis when this episode appears, God had rescued the family of Noah. Their descendants repopu­lated the drenched world, spreading out and multiplying. Generation followed generation. They grew strong in numbers, but weak in spirituality. They failed to appreciate God’s grace. Gratitude after the rescue from the flood gave way to a self-assured, humanistic outlook on life. People lost all gratitude and became grasping, questing for the same thing they wanted in Eden: personal autonomy, “freedom,” the right to be master of one’s own destiny.

Now the whole earth had one language and the same words. And as they migrated from the eastward they came upon a plain in the land of Shinar and settled there. And they said to one another, “Come, let us make bricks, and burn them thoroughly.” And they had brick for stone, and bitumen for mortar. Then they said, “Come, let us build ourselves a city, and a tower with its top in the heavens, and let us make a name for ourselves; otherwise we shall be scattered abroad upon the face of the whole earth” (Genesis 11:1-4).

The whole world (pre­sumably the world sketched in Genesis 10) had one common lan­guage. (The Hebrew says they were "one lip, and one voice/language for all.") They understood one another. Yet—were they restless?—people drifted eastward until they came to Shinar (Sumer), the Old Babylonian Empire—well known to the ancient Hebrews. Recall that Adam had to pack up and leave Eden, an “exile.” Cain too became a fugitive. Noah was carried far away by the surging flood. And now his descendants were wandering, seek­ing security. If only they’d sought a city with true foundations (Heb 11:10). Instead, weary of the travel, they sought to put down roots—urban roots (see 4:17).

Their common cause: to build a city, and particularly a tower. It is quite possible that the temple complex of the tower not only dominated, but also constituted the city -- a place of temples, government buildings, government workers, the nobility and the king. (Commoners would have probably lived outside the city.)

Their scheme involved superior construction technique. In this cause they were united. Unity is good, provided those unified are inclined towards God. But this was hardly the situation at Babel. Humankind as a whole was still on the run from God, and wished for security. The Tower of Babel was to be (in effect) a monument to human ego.

Ziggurats
Most scholars agree that Genesis 1-11 is in dialogue with Ancient Near Eastern culture—and much of this part of Genesis appears to be a radical rework­ing of that story. What about Babel? Enuma Elish, the creation account of the Babylonians, begins with creation and ends with the construction of a temple to Marduk, king of gods in the Babylonian pantheon. There is no tower in the pagan account. Yet there is a direct connection between the Tower of Babel and ancient Babylonia, and it is archaeological.

The tower was almost certainly one of the dozens of ziggurats (stepped pyramids) discovered in the region of Babylonia, for example the great stepped pyramid of Etemenanki (Babylon), or the Ziggurat at Ur (photo below). Archaeologists have also identified stepped pyramids outside Mesopotamia, in Egypt, Guatemala, Indonesia, Italy, Mexico, Nigeria, Peru, and even the United States (Illinois). The steps make the pyramids easier to construct and easier to ascend—no need to posit the activity of “aliens”!

Ziggurats were topped with temples—like the Tower of Shechem (Judges 9:46). Babylonian reli­gion was heavily focused on astrology, which was facilitated atop the ziggurats. (Until recent centuries, there was no distinction between astronomy [a legitimate science] and astrology [pure superstition].) The implications of the multiple allusions to paganism in the pages of Genesis are easily overlooked by modern readers. This is why the study of history, archaeology, and ancient literature is so important, for they illuminate the biblical stories, shedding light and preventing simplistic understandings of God’s word.

Even though the Tower was meant to reach the heavens, its penetration into the celestial sphere was minuscule. The Lord has to “come down” to see the tower—so small is it, so far short of the lofty purpose for which it was built.

Yahweh came down to see the city and the tower, which mortals had built. And Yahweh said, “Look, they are one people, and they have all one language; and this is only the beginning of what they will do; nothing that they propose to do will now be impossible for them. Come, let us go down, and confuse their language there, so that they will not understand one another’s speech.” So Yahweh scattered them abroad from there over the face of all the earth, and they left off building the city. Therefore it was called Babel, because there Yahweh confused the language of all the earth; and from there Yahweh scattered them abroad over the face of all the earth (Gen 11:5-9).

The tower in Babel must not be completed! The God of love refuses to let man self-destruct again. After the Fall, God set cherubim in place, flaming swords brandished. At Babel, he confounds the common tongue of mankind and creates division—which functions as a form of protection against ourselves. After God’s intervention, work on the city grinds to a halt. People couldn’t understand one another; they spoke past one another. Without clear communication, no great project can be accomplished.

Towers aren’t evil in and of them­selves, but they do exert a certain magic on our minds. In Babel the tower embodies the spirit of the world. There isn’t only a tower, but also a city. The Genesis writer is not critiquing urban­ization, but self-aggrandizing empire-building which leads to the destruction of society that claims absolute allegiance. No tower, system, state or political program has the right to demand ultimate or absolute allegiance—to lay claim to our souls. Yahweh will not tolerate the tyranny of totalitarianism.

There’s a play on the Hebrew word babel. In the Akkadian original, it may be intended to mean “gate of God.” In wordplay, it is connected with balal, the verb “to confuse.” What a slam! (Somewhat humorously, in my Hebrew lexicon Babel is located between the words for “act treacherously” and “stinking things.”) They are really “babbling” now; their message is “blah blah blah.” In the consistent style of Genesis, heathen notions and names are tweaked, parodied, and exposed as powerless and empty. God’s word effectively strips the mythology from the pagan beliefs and accounts. Having removed the clutter of manmade religion and superstition, he brings his word to us.

Application
What was so dangerous about the brewing situation in Babel that God had to “come down” and act so dramatically? It doesn’t take any special genius to notice the parallels between Babel and modern society. Babel is where “the wicked freely strut about, when what is vile is honored among men” (Psalm 12:8). What sort of citizen was being produced in Shinar? If we could voyage back through time, the city (dominated by the tower, itself likely a temple complex) would seem eerily familiar. We might encounter:

We too must watch ourselves, lest we become humanistic. It’s easy to be wowed by technology, whether the latest iPhone or the space program to Mars. But technology is not our savior!

It's also easy to compare one Christian to another, one church to another, and commend / criticize them depending on the criteria we assume God values most. Yet when we slip into such thinking -- when we measure ourselves by ourselves -- we are not wise (Col 2:4,8; 2 Cor 10:12). We are not to be wowed by churches, nor are we to preach a system, but Christ alone. "For what we preach is not ourselves, but Jesus Christ as Lord, and ourselves as your servants for Jesus’ sake" (2 Cor 4:5).

Technology and success—without the blessing of God
Of course pride resides not only in “church people” but, to some extent, in all of us. As Jim McGuiggan so well put it:

Unity’s upside and downside
It is arrogant to claim credit for who we are and what we possess (1 Corinthians 4:7). God exposes the Babylonians’ arrogance—even as ancient Rome too later came under the judgment of God and fell—so western culture today is reeling under a spreading moral rot threatening to undermine its very foundations. We are united in moral compromise, narcissism, and ingratitude (Romans 1:21). Of course unity can be a great blessing—or a great curse. “United we stand, divided we fall.” Unity is a blessing if the cause is noble and just. Otherwise, it is a menace.

From the perspective of Genesis, the grand reversal of Babel was yet to take place—at Pentecost (Acts 2). The scattered nations and manifold tongues of mankind would once again be united, communication clear and pur­pose pure. As long as we trust the Lord—refusing to place our faith in structures, plans, and systems—there is hope. We learn—or fail to learn—the lessons of Babel both individually and corporately.

So let’s determine to keep our eyes on Jesus. He is the only one who can unify us in a righteous purpose, and bring us to heaven (actually, not in pretense), for his name (not ours) is the name above all names.