Most of these thoughts about race have arisen in private conversations, traveling to different regions of the country (and the world), or in email exchanges. We've put these into a Q&A format, to keep it punchy.

Do you think the U.S. is racist?
Yes—I’d say so. The roots go deep. Indigenous peoples were labelled “savages,” and deprived of their land and rights. Slavery came to the New World soon after Europeans re-discovered it. An African slave, according to the Constitution, counted as 3/5 of a person. [Yes, I realize that this datum can be used to reach the opposite conclusion. Thanks to those who have pointed this out. I was merely pointing out that we have been conflicted for more than two centuries.] Centuries of slavery have left a deep scar across our land. We’re still feeling the aftershocks of our civil war.

Racism isn’t just prejudice, disrespect, or avoidance. It’s a rigged system. Two equally gifted players step up to the plate. One gets three swings. The other begins with two strikes against him. It’s unfair. Add to this all the prejudice against Asians, Latinos, Muslims, and other groups. Xenophobia is on the rise. Whatever happened to the inscription on the Statue of Liberty (“Give me your tired, your poor / Your huddled masses, yearning to breathe free…")?

Lest you think I’m anti-American, let me say that I’ve observed humans oppressing humans everywhere. The rich distance themselves from the poor. (Jesus didn’t!) Wherever there’s a border, there are wisecracks and tensions and even wars. Oppression is rife in the religious realm, too. Hindus attack Christians (in India). Buddhists persecute Muslims (in Burma). Muslims persecute Christians (this is widespread). Jews suppress Palestinians (in Israel). These things happen because we are sinners. It's a sin problem.

Nor am I claiming that the country hasn’t made headway. It’s not the same world as when I was a boy. The Jim Crow laws were still in effect back then. But we still have a long way to go. Much of the country was built on the backs of slaves. There are so many good things about America, but racial equality isn’t one of them. Maybe it will be one day.

With all the protests—don't you think people are overreacting?
No. Sure, some lapse into violence, but I take this more as a symptom than as a fundamental problem. I suspect that Whites in this country are under-reacting, while many Blacks have been conditioned to hold back. I hope the dialogue and marches don't die down. What a waste if we just revert to the status quo.

How about you—are you racist?
I grew up here. From my first eight years in the South, I remember well the all-black chain gangs slaving behind our property—overseen by Caucasian officers, shotguns at the ready. That sends kids a message. We also lived 10 years in the North. The prejudice was less obvious, but still palpable. I’ll never forget our mayor’s son. Comments and jokes about Jews and Blacks poured from his mouth like a malodorous effluent. (We were in the same Boy Scout troop.) It was offensive. I knew it was wrong.

I became a Christian when I was 18. Since I now had the Holy Spirit, I was pretty sure any residual racism got washed away with all my other sins. I was “colorblind,” and imagined that was a good thing. It’s a nice thought—racial equality. Galatians 3:28 speaks of our unity in Christ. But color does matter. “Colorblind” means we are insensitive to all the reasons it does matter.

The more I interact with people globally, the more I am reminded that only a minority of humans are white. The more I study history, read (books like Just Mercy,  Black Like Me, The Souls of Black Folk, Between the World and Me, Incidents in the Life of a Slave Girl, White Fragility, and The Color of Law), and talk with all kinds of people, the more I realize the privilege to which I was born. I realize it’s not enough just to be kind to others. The Lord said, “From everyone who 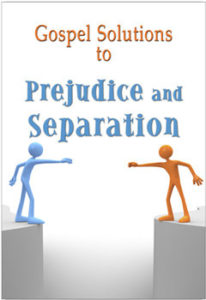 Although I wouldn't say “I am racist,” I can easily say, “I have benefited from racial inequality.”

Is my church fellowship racist?
Is there structural racism in my own church group? Of course. Even though we’re one of the most diverse Christian movements in the world, that doesn’t mean we understand each other or see objectively. Interracial marriage is common. We try to integrate elements of all cultures into our worship. Yet diversity isn't the opposite of racism. The opposite of racism is justice and respect for all—a very tall order, but what the Bible calls us to (Micah 6:8).

On this point I don’t always agree with my brothers and sisters in Christ. Some are hurt when I suggest that they, like me, don’t really “get it.” But the dominant culture isn't in a position to detect systemic inequality, or their own bias. Don’t ask a fish if he’s wet—it’s all he’s ever known. And don’t ask the dictator of North Korea if he thinks he's a tyrant. Ask the citizens. They know.

What should Christians do, biblically speaking?
Maybe we should remember that God's people used to be slaves (Exodus). They were persecuted (Acts and Revelation). Immersing ourselves in the biblical story, we should be more sensitive to racial issues than others. The Bible has a lot to say about injustice, so we should spend time in Amos, Micah, Isaiah—all the prophets.

People need to talk. Can we listen without interrupting, judging, or insisting on airing our own opinions (Proverbs 18:2, 13, 17)? And when change is taking place, can we be supportive—instead of saboteurs?

Everyone's talking—on a planetary level (I'm amazed)—but I don't know. I asked an African American that very question earlier today. His frank words: "I hope so. If we don't, we suck as humans." I agree. It's a matter of humanity.

*** = Added since my original article.