Q&A 1505 – What was the Inquisition? (Torture, witches, Galileo… and lessons for today)

What exactly was the Inquisition?

(If you prefer to listen to my reply, click on the arrow for the podcast, The Inquisition (20 min). If you want to save and listen later, right click here and 'save link as' or 'save target as').

Most of us have heard of the Inquisition, but may be sketchy on the details. Yet this is important stuff - an aspect of history that we definitely don't want repeating itself.

Definition
According to the Oxford English Dictionary, the Inquisition is "An ecclesiastical tribunal established by Pope Gregory IX c.1232 for the suppression of heresy. It was active chiefly in northern Italy and southern France, becoming notorious for the use of torture. In 1542 the papal Inquisition was re-established to combat Protestantism, eventually becoming an organ of papal government."

Origins
It is theoretically possible that some early Christians took severe measures to ensure doctrinal conformity, yet there is no evidence of this in church history until the early Middle Ages.

France and Italy
It is arguable that the First Inquisition at Languedoc, in Southern France, in 1184, although the Inquisition had not been established as a permanent institution until the 1230s, under Pope Gregory IX. Life in prison was offered to those who recanted, execution for those who did not.

The Inquisition was strong not only in France, but also in Northern Italy. Inquisitors were typically drawn from the order of Dominican monks, although Franciscans also served. These men were natural choice, given their grasp of church doctrine. (It could also have been unwise to have the parish priest put the members of his own church on the rack!)

Spain, Portugal, and the New World
Many have heard of the Spanish Inquisition, "An ecclesiastical court established in Roman Catholic Spain in 1478 and directed originally against converts from Judaism and Islam but later also against Protestants. It operated with great severity until suppressed in the early 19th century." (OED)

Isabella and Ferdinand are better known for their interactions with Christopher Columbus, beginning in 1492, as well as for their expulsion of the Jews from Spain (also in 1492) along with resumption of the Reconquista (Reconquest), the effort to reclaim land and loyalty from the Muslims, dwelling in Spain since the 8th century.

Many Jews and som 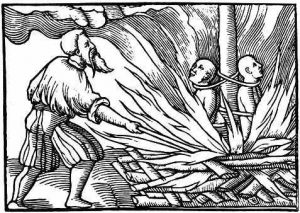 e Muslims pretended to be Christian, in order not to be captured. The last execution of the Spanish Inquisition took place in 1826, of a schoolteacher who was a deist (one who denies the God of the Bible, miracles, the incarnation, etc -- more or less than worldview of many of the founding fathers of the fledgling American republic.

The Inquisition was established in Portugal in 1536. From there is reached Goa (southwest India) in 1560. The Spanish Inquisition was taken to the New World, especially notorious in Peru and Mexico.

Galileo Galilei
Galileo ran afoul of the Inquisition in 1633. It is not true that he was executed for promoting his idea that the earth orbited the sun, although he was censured (and censored) and placed under house arrest. Many intellectuals -- all intellectuals were Catholic in Italy and other European countries, so this was hardly a case of the Church vs. Science! -- probably agreed with Galileo, yet preferred the public not be informed of the latest scientific discoveries. They feared that a crisis of confidence might be triggered, particularly as the ignorant were unable to understand the science or theology. The church, in other words, was protecting the power structure.

Persecution of Witches
Pope John II opened the Vatican archives to external historians, which resulted in the confirmation of a number of executions of witches during the Inquisition. Perhaps the totals are higher, but the official count is 59 witches killed in Spain, 36 in Italy, and 4 in Portugal -- 99 all together. (Protestants killed a small number of witches, perhaps fewer than 40, in the America during the colonial period.)

Torture and Execution
Although mutilation was technically forbidden, in 1256 Pope Alexander V created a loophole for the inquisitor. There were many methods of torture:

As for execution, heretics were often burned at the stake. In the past I had heard that 100,000s had been executed -- and unfortunately repeated this figure -- yet the true total appears to be in the 1000s. (An exaggeration by opponents of the Catholic Church?) To see what the Bible says about execution, listen to my podcast on Capital Punishment (website membership and login required).

The Inquisition in the 21st century
The Inquisition still exists today, though without the torture and death. Its current name (since 1542) is the "Congregation for the Doctrine of the Faith."

It is easy to condemn the Catholic Church for its extreme measures. While shock is merited, we in the modern age are likely to underestimate the seriousness (and fear) with which dissent was viewed by secular and ecclesiastical leaders, from the Middle Ages until relatively modern times.