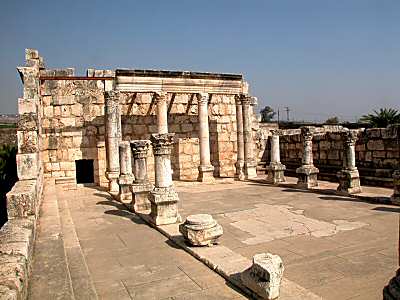 21 They went as far as Capernaum, and at once on the Sabbath he went into the synagogue and began to teach. 22 And his teaching made a deep impression on them because, unlike the scribes, he taught them with authority.

23 And at once in their synagogue there was a man with an unclean spirit, and he shouted, 24 'What do you want with us, Jesus of Nazareth? Have you come to destroy us? I know who you are: the Holy One of God.' 25 But Jesus rebuked it saying, 'Be quiet! Come out of him!' 26 And the unclean spirit threw the man into convulsions and with a loud cry went out of him. 27 The people were so astonished that they started asking one another what it all meant, saying, 'Here is a teaching that is new, and with authority behind it: he gives orders even to unclean spirits and they obey him.' 28 And his reputation at once spread everywhere, through all the surrounding Galilean countryside.

29 And at once on leaving the synagogue, he went with James and John straight to the house of Simon and Andrew. 30 Now Simon's mother-in-law was in bed and feverish, and at once they told him about her. 31 He went in to her, took her by the hand and helped her up. And the fever left her and she began to serve them.

32 That evening, after sunset, they brought to him all who were sick and those who were possessed by devils. 33 The whole town came crowding round the door, 34 and he cured many who were sick with diseases of one kind or another; he also drove out many devils, but he would not allow them to speak, because they knew who he was.

35 In the morning, long before dawn, he got up and left the house and went off to a lonely place and prayed there. 36 Simon and his companions set out in search of him, 37 and when they found him they said, 'Everybody is looking for you.' 38 He answered, 'Let us go elsewhere, to the neighbouring country towns, so that I can proclaim the message there too, because that is why I came.'

39 And he went all through Galilee, preaching in their synagogues and driving out devils. 40 A man suffering from a virulent skin-disease came to him and pleaded on his knees saying, 'If you are willing, you can cleanse me.' 41 Feeling sorry for him, Jesus stretched out his hand, touched him and said to him, 'I am willing. Be cleansed.' 42 And at once the skin-disease left him and he was cleansed. 43 And at once Jesus sternly sent him away and said to him, 44 'Mind you tell no one anything, but go and show yourself to the priest, and make the offering for your cleansing prescribed by Moses as evidence to them.' 45 The man went away, but then started freely proclaiming and telling the story everywhere, so that Jesus could no longer go openly into any town, but stayed outside in deserted places. Even so, people from all around kept coming to him.