"Fear or Faith?" (27 mins) is the eighth reflection in our series on Isaiah. Suggested: Take a look at the maps below, to make it easier to follow the lesson—unless you're an OT geographical wiz!

Usual human fears include fear of heights, drowning, germs, public speaking, and death. But in Isaiah the common fear (which we see in chapters 7-8) is political fear—fear that may drive one to bank on certain political or military outcomes.

Israel was not alone. There were other nations around her (on all sides apart from her Mediterranean coast). Some powers were friendly, others were not. There was plenty of bad blood all around. God’s covenant people were often tempted (and tested) by these nations, and the fear of invasion or warfare. The year is 733 BC. Ahaz is the king of Judah, and he has an opportunity to live by faith (instead of fear), especially with generous input from the prophet Isaiah. 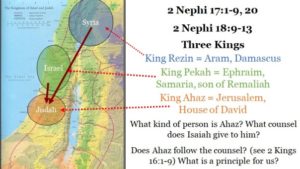 Vs.8-9—65 years from now, the Assyrian king Esarhaddon (in 671 BC) will bring in settlers, ending all hope of a revival of the northern kingdom. Word-play: ta’amînû (believe) v. tē’āmēnû (be established). JB: “If you do not stand by me, you will not stand at all.” Will Ahaz bank on political astuteness, or on the Lord? He turns to Assyria! Assyria takes Galilee, Trans-Jordan, Megiddo, and other towns in 733 BC. Damascus falls in 732, Samaria in 722.

Vs.10-14—Ahaz doesn’t want to ask for a sign because he doesn’t want to listen to Isaiah! ‘Immānû-’ēl = with-us God. This is a dual prophecy, relating to Isaiah's second son and the Messiah to be born more than seven centuries later. “Thus the announcement of God’s sign to Ahaz in his hour of despair is a fitting reference to illuminate the birth of a lowly infant in stable straw whom God had destined to save the world not by force of arms but by meek acceptance of humiliation and death. That God chooses to accomplish his primary goals in such ways is as much the message of Isaiah as it is of the Gospels” (John D. W. Watts, Isaiah 1-33, in Word Biblical Commentary [Nashville, TN: Thomas Nelson, 2005], 142). 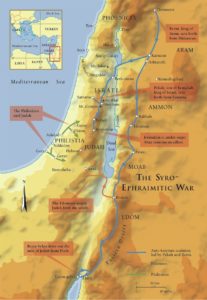 Vs.15-17—Curds and honey—not a luxury food, but all that’s available when cultivatable land is overrun with weeds and thorns. Assyria will come! Throughout the 700s. In 743 Tiglath-Pileser III had already begun a series of campaigns into Palestine—the first of which the Assyrian annals state was stopped by “Azriau of Yaudi” (Azariah / Uzziah?). But even she fell to the Babylonians (612 BC). The Babylonians would come next—in 3 waves (605, 597, 587 BC).

Vs. 18-25—Judgment and its consequences. Invaders. No arable land. Lack of security (people will want to take their weapons with them). The vineyard is trampled.

There is a shift in chapter 8 from third person to first person discourse, as Isaiah shares the various messages he has received from the Lord.

8:1-4—Prophecy on a tablet, as in Hab 2:2. Witnesses to the prophecy (2 or 3 required for legal documents). The prophetess is apparently Isaiah’s wife. Mahēr-shālāl-chāsh-baz: quick to the plunder, swift to the spoil. That is, before the child is two, Syria and Ephraim will be ruined—by Assyria. Prophecy normally applies to the near future (in this case, just a year or two away), not the distant future.

Vs.5-10—“This people” (v.5) — the Lord is losing patience. Ahaz tempted to join in an active rebellion against Assyria. This would be futile! Flood of overflowing of Euphrates v. gentle waters of Shiloah. (Images, not literal—the Euphrates is nowhere near Israel.) Wings—bird of prey hovering over Judah, ominously—like Jer 48:40 and Hos 8:1.

Vs.11-15—Trust in the Lord, not Assyria. Even though the Lord has decided to turn his people over to the Assyrians—the north, completely so by 722, and the south, mainly so by 701. “Verse 15 sums up the section by representing the wrong-headed and stubborn 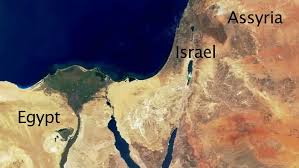 Vs.19-22—People mock the prophet. Yet ultimately, he will be vindicated. Their heads will be turned upward (in anger and disappointment)—and downward (in despair—no hope). King—The Judean monarchy is in decline. The royal house of David has plays no significant role after the return from exile (538 BC). From now on the people of Israel will be dominated by great empires (Assyria, Babylon, Media/Persia, Greek, Seleucids, Rome). Darkness—like end of chapter 5.

How about us? Are these unsettling times economically? Politically? Militarily? Epidemiologically? How shall we live? Will it be fear—or faith?

In the next chapter (next reflection), some light will shine!