Is the Holy Land the Promised Land? | The Christian Chronicle

Is the Holy Land the Promised Land?

Leading evangelical supporters of President Trump tout the modern state of Israel as a fulfillment of biblical prophecy. Scholars in Churches of Christ take a different view.
By

JERUSALEM — To prominent evangelical allies of President Donald Trump, “the Lord is at work” in the administration’s high-profile backing of Israel.

“The fact is, I think President Trump has been raised up by God to help protect the Jewish people.”

From moving the U.S. embassy to Jerusalem to recognizing Israel’s sovereignty over the disputed Golan Heights, Trump has delighted evangelicals who view the modern Jewish state as a fulfillment of biblical prophecy.

“The fact is, I think President Trump has been raised up by God to help protect the Jewish people,” said Robert Jeffress, senior pastor for the First Baptist Church of Dallas and a Trump adviser who gave the opening prayer at the embassy dedication last year.

Eighty percent of Americans with evangelical beliefs say God promised the land of Israel to Abraham and his descendants for all time, according to a survey by Nashville, Tenn.-based LifeWay Research.

Related: In Israel, a missile attack and a monk stir reflection

But Churches of Christ — with an estimated 1.4 million adherents in 12,000 autonomous congregations in the United States — generally don’t share that theology, according to scholars interviewed by The Christian Chronicle.

“The political question you’re asking really requires one to make a distinction between the modern state of Israel and Israel in the Bible,” said Evertt Huffard, professor of leadership and missions at Harding School of Theology in Memphis, Tenn. “There’s absolutely no connection, and to make that connection is really a mistake.

“The secular state of Israel — it is a name only. It has no relationship to ancient Israel,” said Huffard, who attended high school in Ramallah, West Bank, before the Six-Day War of 1967 and later served as a Christian missionary in Nazareth, Israel, for five years. “At least from our perspective in the Churches of Christ, the new Israel is the church, in the people of God. It’s not limited to one ethnic group or geography.”

“Christians living in the United States should not confuse their religion with their country’s foreign policy,” said Coates, urging fellow believers to strive for unity and peace with all people.

“At least from our perspective in the Churches of Christ, the new Israel is the church, in the people of God. It’s not limited to one ethnic group or geography.”

Still, a majority of members of Churches of Christ live in Republican-dominated states such as Texas, Tennessee, Alabama and Oklahoma. Those Christians often support candidates with conservative positions on issues such as abortion and same-sex marriage.

“I would think they do not see Israel as the fulfillment of prophecy,” said Bobby Valentine, minister for the Eastside Church of Christ in Antioch, Calif., and author of books on Restoration Movement history. “However, at the same time, they are also deeply conservative and Republican, so they are likely to still be pro-Israel.

“A faithful church member I know is pro-Israel but thinks premillennialism is false doctrine,” Valentine added.

In his interview with the Chronicle, Jeffress rejected the notion of Israel’s restoration accelerating Christ’s return.

“Now, contrary to what some people believe, premillennialists like myself do not believe there’s anything we can do to hasten the coming of God by causing conflict in the Middle East,” the Baptist pastor said. “That’s absurd thinking, and no serious student of Scripture believes that. But we do believe God has a plan for the world, and part of that plan is the fulfillment of his plan for Israel.” 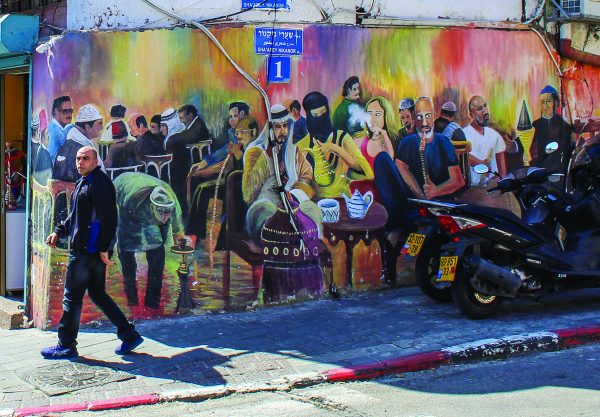 A man walks by a mural in Jaffa, part of Tel Aviv. Known in the Bible as Joppa, the community is about two-thirds Jewish and one-third Muslim.

It’s the history of the Holy Land — not a belief in a contemporary Promised Land — that inspires thousands of members of Churches of Christ to make spiritual pilgrimages to Israel.

“Riding on a boat on the Sea of Galilee, sitting on a hillside listening to the Beatitudes being read, sharing communion in the Garden of Gethsemane on the Mount of Olives, walking on the temple steps where Jesus walked — it still touches your heart and brings tears to your eyes each and every time,” said Sheryl Peters, whose husband, Doug, preaches for the Grace Crossing Community Church of Christ in Conroe, Texas, north of Houston.

Sarah Fantinel, a junior at Lubbock Christian University in Texas, traveled to Israel over spring break.

“The Land of the Holy One is incredibly important because it helps us to better understand our own faith,” said the 20-year-old student, who recalled her baptism in the Jordan River. “The water was a little cold, the sun was just setting behind the trees, and that memory will always be special to me as we recommitted our lives to the Lord.”

As for politics and prophecy, Fantinel said, “The nation of Israel as it stands today has always existed in my lifetime, and so personally, I have not given it much thought.”

Children ride bicycles outside the Hurva Synagogue, also known as Hurvat Rabbi Yehudah he-Hasid, in the Jewish Quarter of the Old City of Jerusalem.

Doug Peters, who has visited Israel five times in the last 20 years, said he focuses on discipleship, not the politics of Zionism or the Jewish state.

“Because that small area of land has been conquered and claimed by so many people groups over the years, simple solutions will never be easily found,” the Texas minister said. “We’ve chosen to focus on walking where Jesus walked and experiencing the Lord and Scripture in new and meaningful ways.”

Yet American politics and evangelical theology often intertwine in headlines about U.S.-Israel relations.

In an appearance on the Christian Broadcasting Network, Secretary of State Mike Pompeo agreed with an interviewer who likened Trump to the biblical Queen Esther.

“Could it be that President Trump right now has been sort of raised for such a time as this, just like Queen Esther, to help save the Jewish people from the Iranian menace?” CBN’s Chris Mitchell asked Pompeo, a former deacon and Sunday school teacher for an Evangelical Presbyterian Church in Kansas.

“As a Christian, I certainly believe that’s possible,” replied Pompeo, discussing his recent visit to Jerusalem, where he placed a prayer note between stones at the Western Wall, the last remaining part of the second temple of the biblical period.

“To see the remarkable history of the faith in this place and the work that our administration’s done to make sure that this democracy in the Middle East, that this Jewish state remains, I am confident that the Lord is at work here,” the secretary of state added.

Related: Vignettes from Israel: Why these Christians travel to the Holy Land

Israeli Prime Minister Benjamin Netanyahu — a Trump favorite — won a fifth termApril 9. Now that the election is over, the Trump administration is expected soon to present its “Deal of the Century” plan for Israeli-Palestinian peace that has been in the making for two years.

Pompeo’s remarks came a few days before Trump signed a proclamationrecognizing Israel’s sovereignty over the disputed Golan Heights, captured from Syria in the 1967 Mideast war.

“There’s a very biblical as well as historical reason for that,” Jeffress, the Baptist pastor, said of supporting Israel’s right to control the Golan Heights. “When you’re talking about the Golan Heights or the West Bank, all of these were named in Scripture as a part of Israel originally.

“Israel did not begin in 1948,” he added, referring to the independent state’s creation after World War II and the deaths of 6 million Jews in the Holocaust. “It’s been in existence for thousands of years.”

Related: Elephant in the pews: Is the GOP the party of Churches of Christ?

Ed Stetzer, director of the Billy Graham Center at Wheaton College in Illinois, said evangelicals can believe that modern Israel is “prophetically significant” without endorsing the Jewish state’s every action.

“I think that’s part of what people are thinking about today,” Stetzer said. “How can evangelical belief — which values the image of God in all people, including Jews, Palestinians and many others — hold to a view that values the restoration of Israel and cares about justice for all peoples?”

A mosque can be seen in an Arabic community in Israel, as viewed from a helicopter flying from Tel Aviv to the Golan Heights, an Israeli-occupied territory captured from Syria in 1967.

Ironically, many religious Jews took issue with Zionism, the political movement that emerged in the late 19th century and advocated reestablishing a Jewish homeland in Palestine.

“Many Orthodox Jews were opposed to Zionism because (they believed) it hastened what should have been God’s work,” said Rabbi Noam Marans, the American Jewish Committee’s director of interreligious and intergroup relations. “The return of the Jewish people to the land of Israel usurped God’s domain and empowered human beings to achieve that.”

But often, the conflict is between Jews themselves, as secular and Orthodox Jews clash over what should happen when democratic values collide with Jewish law (halakha), according to a Pew Research Center study.

Marcie Lenk, a research fellow at the Shalom Hartman Institute in Jerusalem, grapples with how to deal with the Israeli-Palestinian conflict.

“For me as a Jewish Israeli, I cannot view my arrival simply as a fulfillment of the destiny of the Jewish people or God’s will,” Lenk said. “I feel an enormous responsibility to deal with the reality that is Israel. We must find a way for Jews to live in safety and security without neglecting the legitimate needs and claims of the Palestinian people.

“For too many people in the world, there is a perception of a zero-sum game,” she added. “If we acknowledge or even speak of the other side, they win, and we lose. This is the argument taking place on American college campuses and now even in Congress — the pro-Israel advocates have their talking points, and the anti-Israel group has theirs.”

Both Jews and Muslims consider Jerusalem holy as it contains the Temple Mount, which includes Judaism’s Western Wall and Islam’s al-Aqsa Mosque and Dome of the Rock.

Unfortunately, Lenk said, “Nobody crosses from one side to the other, and nobody gains a better understanding of the other. In my opinion, the Twitter war is not leading to a better life for anyone.”

“In my opinion, the Twitter war is not leading to a better life for anyone.”

Visit the Middle East, and gain a firsthand understanding of the geography and the people.

“There’s value in just going there and experiencing it,” said the Harding School of Theology professor, who has taken groups to the Holy Land for 25 years. “I would not want anyone to leave Israel hating the Jews. Nor would I want them go away not understanding or empathetic toward the plight of the Palestinians.”