Is Humility Just for the Minority? 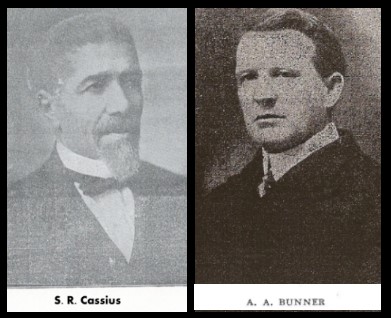 As we close out Black History month, I will call our attention to a pair of individuals who embodied an exemplary posture of humility. They supported one another at a time when black and white men rarely entertained such thoughts. These two men are Samuel Robertson Cassius and A.A. Bunner. Cassius was a black Church of Christ preacher in the early 20th century who spoke against racial discrimination. Bunner was his contemporary as a white CoC preacher who found Cassius’ writings and sermons convicting to the point that he too began speaking against the “race problem.”

Is humility just for the minority? Bunner said of Cassius, “We all looked upon Bro. Cassius as one of the most humble, God-fearing men, either in white or black skin, we ever met (Bunner, A.A. “Gospel Flashlights,” Christian Leader Oct. 21, 1919:9).” What I find noteworthy about Bunner’s words is how a person in the majority (white America) supported a person in the minority (black America). Bunner also had held to the majority position of thinking that there was no race problem in America, while Cassius held the opposite, minority perspective. Bunner could have easily dismissed Cassius’ view of the “race problem” as outlandish since only a few in his mind subscribed to such thinking. Yet Bunner was humble enough to consider another perspective.

Humility from Cassius, as a black preacher, was expected during a time when blacks were marginalized. It was encouraging to see that Bunner, as a white man with influence in a nation powered by white men, spoke up for blacks. He put his reputation on the line and chose the way of Christ as he supported his black brothers and sisters. Though neither the minority or majority position will always be accurate, are we willing to lean in, learn, and be open to changing our perspective?

Can we appreciate the power and the cruciform way of life when one with more power and resources supports the one with less? Consider the story in the gospel of John regarding the woman caught in adultery. She was in the minority as a woman amongst a group of men. She was in the wrong as the one (out of two) who committed adultery, but then the unthinkable happened. The woman, in her humiliation, was seen by Jesus in her situation. Jesus could have easily quoted the Law of Moses and encouraged its consequences for adultery; however, he came to seek and save the lost. He came to set the captives free by showing a depth of love that unhinged the metaphoric shackles for all who would repent. Jesus came to display a level of humility befitting for the King of kings and for all those who would follow him.

Over the years, disputes within our movement were sparked by the topics of race, instrumental worship, women’s roles, and mission societies leading to multiple splits and divisions. I would bet that during these disputes, humility tended to be something needed by the other person. A.A. Bunner teaches us to take the perspective of the other person by trying to see it from their vantage point. Jesus teaches us to do so even if the other person is wrong! Jesus could have held to the majority position AND the right position in the matter with the woman, but he chose to display humility and compassion while calling her to a righteous life. All of us disciples of Jesus must ascribe to this cruciform lifestyle, and I am grateful that Common Grounds and my church home in Dallas lean towards this life. Brothers and sisters, as we strive to imitate Jesus in this world, let us consider, “Is humility just for the minority?”

Clint Mosley serves as an evangelist, leading one of six worship centers in DFW Church. He spent 10 years in corporate sales in Oklahoma City before he and his wife answered the call to go into the full-time ministry in Dallas in 2015. Clint is pursuing a Master’s degree in Missional Leadership from Rochester University and received his Bachelor's in Library Information Studies from the University of Oklahoma. He loves being married to his wife of 16 years and enjoys the challenge of trying to keep up with his two kids: Jasmine and Nicholas.