A thoughtful American sister recently asked what I thought of evangelical scholar David P. Gushee’s Changing Our Mind: Definitive 3rd Edition of the Landmark Call for Inclusion of LGBT Christians with Response to Critics (Canton, MI: Read the Spirit Books, 2017). I asked her if the book was well done—with over 1 million new books appearing every 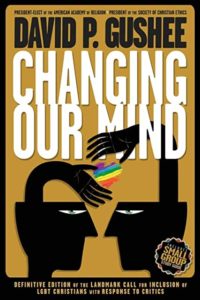 year, we all need to be selective! She said Changing Our Mind is well worth reading, so I ordered it right away, and read it last week. And I am glad I did; this is an important work, if only because it is influential.

Meanwhile, a friend dealing with LGBTQ issues in his own community emailed, mentioning Gushee and asking some pointed biblical questions. (Several of these I address in an interview with Guy Hammond, “Gay & Christian?”.) But after a few hours fleshing out my thinking on Gushee’s work, I stopped.

Who am I, after all? I’m not the most qualified to engage these issues, even though I’ve been an adviser for Strength in Weakness since its inception, and appreciate the seriousness and relevance of sexual issues in our day. Yet knowing when to “lateral” is an important and time-saving skill. So, remembering my friend Paul Copan, a great thinker who is both a philosopher and an ethicist, I asked him if he’d written anything in response to Gushee.

Lateraling himself, Paul told me he had a friend, George Guthrie [photo below L], who’d offered a thorough and balanced critique of Changing Our Mind. Better still, it turns out that Guthrie is a friend of Gushee—lending both credence and the personal element to his critique. I observe four degrees of separation: Gushee-Guthrie-Copan-Jacoby. This is also a chain of friendship: David and George are friends; George and Paul are friends; Paul and I are friends. Relationship is important if we're not to demonize or misrepresent others.

Guthrie’s critique appears at the website of The Gospel Coalition under Bible & Theology: Changing Our Mind” (January 9, 2015). (No—the review doesn’t precede the book! The bibliographic information above pertains to the first edition.) Click HERE for Guthrie’s response.

If you’re interested, following are some of my own thoughts in response to David Gushee. (But I think Guthrie’s response is better done than mine, so please don’t miss it!)

There are many interesting and valuable points in Changing Our Mind. The following comments generally follow the page order of the 2017 edition. That is, the bullet points aren’t in order of importance.

Yet the book is uneven in the quality of its arguments, and many times I noted errors of fact or logic.

He seems to admit that the case for homosexuality is weak, and is refuted by six texts (the so-called “clobber passages”) (154). This reminds me of my 2020 debate on baptism with Baptist scholar Thomas Ross. Thomas asked me if I could still make my case if the six most convincing baptism texts were removed from the New Testament—a sort of tacit admission of the weakness of his own case.

“Therefore, it simply is a violation of my own hermeneutic to read six passages that might speak negatively about some version of same-sex activity in some remote historical context apart from the broader moral framework provided by this Jesus. And this Jesus inevitably broadens the LGBTW issue out from merely being about who can have sex with whom to how vulnerable people should be treated, a key question for both the prophets and Jesus” (156). But the Old Testament was Jesus’s Bible. Why should we think that Jesus rejected the normative Jewish understanding of the scriptures regulating sexual activity? Although some of his reasoning is flawed, I believe it’s fair to say that readers may be distracted from the key biblical texts by his skillful storytelling and personal anecdotes. These are of course welcome, but the validity of his embrace of gay marriage should depend on scripture, not simply anecdote and emotion (head and heart).

As Guthrie rightly observes, “David shapes his argument by weaving a consideration of biblical texts, moral reasoning, and, above all, the evoking of personal stories. It’s important to attend not only to what he argues but how he does so. In many ways, the stories form the foundation of his paradigm shift—with Scripture and reason being reconsidered in light of those stories. We’ll dig down to that foundation by working our way through David’s approach to the Bible and his ethical arguments.”

Last, maybe the problem isn’t caused by inconsistent practice of church discipline—although Gushee’s point about our hypocrisy in policing for one sin but not for another is well taken. I rather suspect our standards are too low to begin with—all around. 1 Corinthians 5 is an ignored passage in evangelical churches. Preachers should preach on all sins, and church members as a body should enforce the expectation of holiness in their own lives and in the fellowship.

Anyway, you have my thoughts above, and don’t forget George Guthrie’s valuable critique.