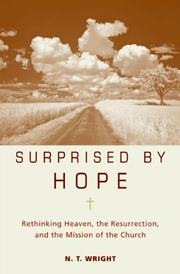 A bishop described as "one of the most formidable figures in the world of Christian thought" is now challenging the widely held belief that Christians go to heaven when they die.

N.T. "Tom" Wright, the fourth most senior cleric in the Church of England who has been praised for his staunch defense of the literal resurrection of Jesus Christ, has published a new book in which he says people do not ascend to God's dwelling place. Instead, deceased believers are in a sleep-like state until God comes back to Earth.

"Never at any point do the Gospels or Paul say Jesus has been raised, therefore we are we are all going to heaven," Wright told Time Magazine. "I've often heard people say, 'I'm going to heaven soon, and I won't need this stupid body there, thank goodness.' That's a very damaging distortion, all the more so for being unintentional."

When asked to explain why he rejects that typical sentiment, he said, "There are several important respects in which it's unsupported by the New Testament. First, the timing. In the Bible we are told that you die, and enter an intermediate state. [The Apostle] Paul is very clear that Jesus Christ has been raised from the dead already, but that nobody else has yet. Secondly, our physical state. The New Testament says that when Christ does return, the dead will experience a whole new life: not just our soul, but our bodies. And finally, the location. At no point do the resurrection narratives in the four Gospels say, 'Jesus has been raised, therefore we are all going to heaven.' It says that Christ is coming here, to join together the heavens and the Earth in an act of new creation."

In the Gospel of John, Jesus himself is quoted as saying, "And no man hath ascended up to heaven, but he that came down from heaven, even the Son of man which is in heaven." (John 3:13)

In "Surprised by Hope," published by HarperOne, Wright quotes a children's book by California first lady Maria Shriver titled 'What's Heaven,' which describes it as "a beautiful place where you can sit on soft clouds and talk ... . If you're good throughout your life, then you get to go [there]... When your life is finished here on Earth, God sends angels down to take you heaven to be with him."

Wright calls that a good example of "what not to say," explaining the biblical truth "is very, very different."

When asked by Time about the period between death and the resurrection of the dead, Wright said: "We know that we will be with God and with Christ, resting and being refreshed. Paul writes that it will be conscious, but compared with being bodily alive, it will be like being asleep. The Wisdom of Solomon, a Jewish text from about the same time as Jesus, says 'the souls of the righteous are in the hand of God,' and that seems like a poetic way to put the Christian understanding, as well."

He continued: "Our culture is very interested in life after death, but the New Testament is much more interested in what I've called the life after life after death – in the ultimate resurrection into the new heavens and the new Earth. Jesus' resurrection marks the beginning of a restoration that he will complete upon his return. Part of this will be the resurrection of all the dead, who will 'awake,' be embodied and participate in the renewal. John Polkinghorne, a physicist and a priest, has put it this way: 'God will download our software onto his hardware until the time he gives us new hardware to run the software again for ourselves.' That gets to two things nicely: that the period after death is a period when we are in God's presence but not active in our own bodies, and also that the more important transformation will be when we are again embodied and administering Christ's kingdom."

Wright, whose 2003 book, "The Resurrection of the Son of God," received widespread acclaim in the Christian community, says many people have been confused about what happens at death by Jesus' statement to a thief who was being executed next to him.

He explained: "There is Luke 23, where Jesus says to the good thief on the cross, 'Today you will be with me in paradise.' But in Luke, we know first of all that Christ himself will not be resurrected for three days, so 'paradise' cannot be a resurrection. It has to be an intermediate state. And chapters 4 and 5 of Revelation, where there is a vision of worship in heaven that people imagine describes our worship at the end of time. In fact it's describing the worship that's going on right now. If you read the book through, you see that at the end we don't have a description of heaven, but, as I said, of the new heavens and the new Earth joined together."

Wright says much of "traditional Christianity" has been influenced by pagan philosophies.

"Two obvious ones are Dante's great poetry, which sets up a heaven, purgatory and hell immediately after death, and Michelangelo's 'Last Judgment' in the Sistine chapel, which portrays heaven and hell as equal and opposite last destinations. Both had enormous influence on Western culture, so much so that many Christians think that is Christianity," he said.

While Wright's view may seem stunning to many of today's Christians, similar views were held by some famous names in the Protestant Reformation.

In 1520, Martin Luther blasted Catholic ideas "that the soul is immortal; and all these endless monstrosities in the Roman dunghill of decretals."

A decade later, English Bible translator and martyr William Tyndale echoed the idea Christians are completely dead until Jesus returns, as he voiced opposition to "heathen" ideas of people having immortal souls at birth:

The true faith putteth [setteth forth] the resurrection, which we be warned to look for every hour. The heathen philosophers, denying that, did put [set forth] that the souls did ever live. And the pope joineth the spiritual doctrine of Christ and the fleshly doctrine of philosophers together; things so contrary that they cannot agree, no more than the Spirit and the flesh do in a Christian man. And because the fleshly-minded pope consenteth unto heathen doctrine, therefore he corrupteth the Scripture to stablish it.