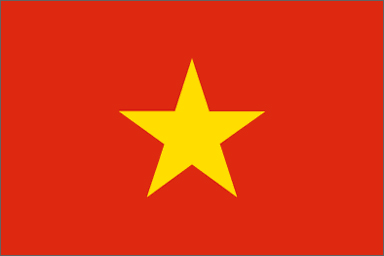 Today Vietnam has 89 million inhabitants, primarily Vietnamese (87%), followed by Thai-Dai (5%) and Mon-Khmer (4%) and several other ethnic groups. This is one of the last bastions of Communism in the world. (Of course most of the world may have renounced Communism, yet the principal exception, the People's Republic of China, is an enormous exception!) As in the old Soviet Union, the constitution guarantees freedom of religion, but the reality is a far cry from it. Buddhists (54%) and Christians (8%) are harshly treated and controlled.

Prayer needs are many: freedom of religion, AIDS, prostitution, lacks of Bibles (only 100,000 Bibles and New Testaments for the entire nation), child exploitation, abortions (Vietnam has the world's highest abortion rate -- two abortions for each one live birth), and of course continued recovery from the economic and emotional devastation of decades of war. Source: Operation World.

Please pray for the Vietnamese people today, not just those in Indochina, but for all scattered around the world.

This is my second time in Vietnam. In 2008 I was in Ho Chi Minh City (formerly Saigon), in the south. The 2011 visit is to Hanoi, in the north. A wonderful time with disciples of good and noble heart.