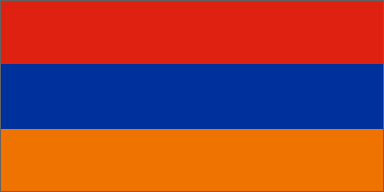 The small nation of Armenia (population 3.5 million) is surrounded by the nations of Turkey, Georgia, Azerbaijan, and Iran. The capital city is Yerevan, and the average Armenian makes US$650/year.

The nation is 85% Christian, primarily Armenian Apostolic, and has enjoyed religious freedom since the collapse of communism. Historically speaking, it was also the first country to embrace Christianity at the official and national level. This took place around 306 AD. For comparison, the Emperor Constantine became favorable towards Christianity about five years later, though he delayed his baptism till shortly before his death in 337. (For more on this, click here.)

I hope to travel to Armenia in 2010, funds allowing. In the meantime, please say a prayer for Armenia right now. UPDATE: That did not happen. But I was able to meet Armenians in Georgia at a retreat for 5 churches in the Caucasus, in 2012.